On this page we present an ever-evolving collection of prayers, stories and articles about our beloved Mother of Mothers Shrine.

Mother of Mothers, holy Queen,
chosen before all women to be the Mother of the Son of God.

Mary my Mother, who in your Maternity
have so sanctified the state of holy motherhood,
imploringly I come to you, humbly I beseech you, confidently I trust in you.

I know that you can by your all-powerful intercession help me in my need.
In you I take refuge, dear Virgin.
Poor and needy, I place my hope entirely in you.
I relinquish all confidently in your hands.
Betray not my humble trust, but hear my petitions
and come to my aid, dear Mother of Mothers.

Recently Carol Spale sent an email to me with a story connected to the Mother of Mothers Shrine. It also came with a great idea of collecting stories of the Shrine, stories of how individuals have been blessed because of the prayers offered to Mary, Mother of Mothers. Let me share Carol’s story:

Our friends from Europe were worried when a doctor told the wife who was going to have a baby that there were fibrous tumors near the birth canal. It was high risk. I immediately enrolled Agnes in the Mother of Mothers shrine list and Zdenec her husband was very happy. Anyway, the tumors just disappeared and she is to have a baby any day now. It was like a little miracle.

If you have a story of the Shrine, of how prayers are answered, please share with us at stpaulviinfo@stpaulviparish.org so we can share with others the graces and blessings of our beautiful Shrine.

Praying for ‘The Grace of Motherhood’
For 50 years a shrine of the Virgin Mary at a North Riverside church has drawn multitudes of faithful
By Joseph Ruzich, Special to the Chicago Tribune
Chicago Tribune Religion Section
December 22, 2006 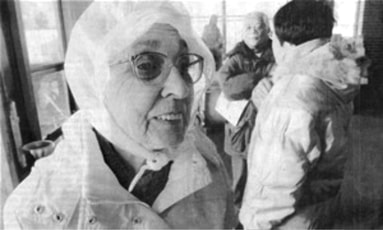 “He was only 24 years old when he died,” said Mikrut, 87, a parishioner at Mater Christi Catholic Church, 2400 S. 10th Ave., North Riverside. “But the Mother Mary helped ease his pain when he was sick. She is the mother of all and I know she is taking care of him.”

Mikrut still visits the shrine, located on the grounds of her church, to pray for her son. “She showers her grace on many mothers and those that believe in her,” she said.

Mothers and other believers from across the country have come to pray at the shrine, which depicts Mary holding the infant Jesus and a modern mother holding her child. The shrine, made of Italian marble, celebrated its 50th anniversary this year and is the only one of its kind in the U.S.

The Mother of Mothers shrine, of the Virgin Mary and Jesus with a modern mother and her child, received a mosaic halo on Dec. 11
He said mothers pray at the shrine for countless reasons, most commonly for pregnancy, safe childbirth, the health of the child, and the strength to be a good mother. Tylka said he sees people visiting it every day.

“One lady stops by the shrine every morning to say a prayer before she drives to work,” he said. “Sometimes people leave items at the shrine. I’ve seen flowers and even a rag doll baby toy.”

He said the parish’s first priest, the late Rev. A.H. Menarik, designed the shrine so that the modern-day woman could relate to it in prayer. The figure below Mary wears high-heeled shoes and 1950s-style clothing, but the faces of the woman and her son are almost identical to those of Mary and Jesus.

“I think that really speaks to people because it gives them the sense that God is living within each of us as well as reflecting through us,” Tylka said. “It’s the dress and shoes that make her look modern, [though] she’s a bit dated by 2006 standards.”

“One gentleman showed up regularly with his children to pray for his pregnant wife,” he said. “I also get letters in the mail asking me to pray to the shrine for them. One instance was a young man who was thinking about becoming a priest and wanted me to pray for him.”

The shrine is known throughout the country, mainly by word of mouth.

More recently, people are also learning about the shrine through the parish’s Web site.

When the shrine was dedicated on Mother’s Day in 1956, the Chicago Daily News reported that an estimated 4,000 people attended the ceremony. Two hundred mothers walked in a procession with the late Cardinal Samuel Stritch, who blessed the country’s first outdoor shrine honoring Mary as the patroness of all mothers.

“Many of us have studied under great professors but none have ever matched our mothers as teachers,” Stritch said at the dedication ceremony, according to the report. “Mother whispered our first prayers to us. She taught us our first lessons about Jesus. Mother seemed to know us and our wants and needs better than anyone else.”

Today, Tylka said, many of the shrine’s visitors live in the area or are among the 3,700 parishioners who attend Mater Christi. His hope is that a shrine-enhancement project completed Dec. 11 will attract more visitors.

The project included constructing a backdrop behind the shrine, adding a mosaic halo behind Mary and cleaning 50 years’ worth of grime and pollution.

It also improved on repairs made shortly after a 1975 vandalism incident that left chips and cracks in the figures’ faces.

In the 1950s, Menarik also developed special prayer devotions that are still read after every Saturday morning mass at the church. (An indoor replica of the shrine is available for praying to Mary in difficult weather.)

“The prayer is about the special grace of motherhood,” Tylka said. “The compassion and the love of God are shown to us through the Blessed Mother and the way she takes care of her child.”

Virginia Kott, who attends mass at the church daily, said the devotions to Mary touch her deeply. “We pray to her because she is the mother of mothers,” Kott said. “She watches over our parish and the whole world.”

North Riverside resident Nancy Roudebush, who gave birth to triplets about a year ago, said she is a regular visitor to the shrine.

“It’s been a joyous and trying year,” said Roudebush, who has three other children. “I rely a lot on prayer and the shrine is a comfort for me. It gives me the strength to be a good mother.”